‘Seeing’ Other People: Enough With the Skype Already

Sensing that my job was in jeopardy last spring, I began applying for new positions hoping to land something before my impending lay off occurred. When a friend sent a link to an opening that seemed perfect, I submitted my resume and received an email from the business owner soon after. Along with the usual pleasantries expressing his interest in chatting further, this entrepreneur wrote something that offended my sensibilities, “What’s your Skype handle?” he wanted to know.

Ugh. It’s not that I’m unfamiliar with the online video chat service, but I’d really hoped the rest of the process could be handled over the phone or, if it went that far, in an old-fashioned, face-to-face sit down. Yet I’ve learned that more frequently employers are using this method for the initial screening, not just a late-in-the-game final step in the hiring process.

Sure, I understand that this medium is far more convenient than actually going through the motions of locating an office building, introducing yourself to an assistant, and making that crucial first impression in person. But if I’m being honest, these teleconferences, whenever they might occur, are beyond awkward.

For starters, where am I supposed to look? At my laptop’s little circle camera that’s smaller than an Altoid? I’ve read some suggestions that state you should print out the LinkedIn headshot of the person you’ll be talking with and tape it beside your computer’s camera to give yourself a focal point. (Feels like a lot of work already, right?)

Am I the only one who finds it challenging to not look directly at the interviewer? So far, I think the folks I’ve had the misfortune of Skyping with haven’t known where to point their gaze either as they all seem to be averting their eyes as if I had a hunk of kale wedged between my front teeth. (One woman appeared to be looking down at her brown carpeting.) Since I’m already wondering if I have something on my face, how do I resist staring at myself in the tiny box in the lower right hand corner. And, when I invariably do, how can I not suddenly blurt out, “My God! I’m starting to look like E.T.!”

But because I need the income, I’ll play their games. Instead of allowing my hair to air dry into Jeff Spicoli-like waves, I brush it.


And then I wonder: “Does a statement necklace imply that I’m trying too hard? Can I keep it casual, hoping that they’ll be smart enough to surmise that beneath my charcoal hoodie and unemployment-related malaise beats the heart of a minimalist wordsmith?”

You see, when you work from home most of the time, as I have for the majority of the last six years, you experience a trade-off: In exchange for the punishing isolation, and the fact that you now talk to yourself and see absolutely nothing wrong with that, you enjoy the luxury of not needing to shower before noon. Plus, you have a uniform, which means you get to wear the same shirt. Every. Damn. Day. I’m not sure I’m ready to emerge from the comfort of my squalid but invisible cocoon just yet.

In my last job, the one I ultimately lost, which pushed me into this “Love Connection”-style interview madness, we had a weekly meeting via Google Hangout so remote employees could watch the goings-on but remain largely ignored while those in the office conference room chatted among themselves. Rather than focus on the dealings at hand, I typically found myself drifting as I looked at each colleague in her natural habitat. I admired one woman’s artwork, another’s Shih-Tzu. I longed to get a close-up of the books housed in the Ikea-style shelving unit behind our copyeditor. I imagined another was an ISIS hostage since she routinely connected from what looked like a beige dungeon, her vacant eyes betraying nothing.

When I was at home rather than in the office and needed to join these video conferences, I found myself dashing around the house attempting not to trip over my cat and my children’s sneakers, which seem to litter the ground as plenteously as autumn leaves, in search of good lighting. But, spoiler alert: When you’re 46, and haven’t slept well in a decade thanks to kids, the stress of job instability, and faulty carbon-monoxide detectors, let me tell you, there is no such thing as good lighting. The best you can do is apply lipstick and try not to look like Gary Busey’s mugshot.

But vanity is not my only issue. Let’s dissect the myriad technical glitches. Thanks to streaming delays, either all parties talk at once or we’re forced to endure uncomfortable silence while people mutter, “Are they frozen? Are we frozen? Wait, who’s frozen?” 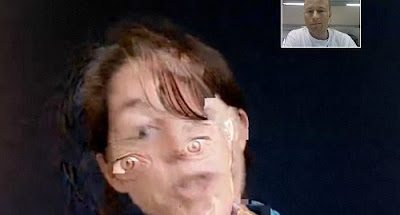 Given this unpleasant history, I’m not thrilled at the prospect of being interviewed this way going forward. How, for example, will I hide my exasperated eye-rolling when a hiring manager tells me that I’ll probably need to speak with at least five other people before being deemed worthy of the four-hour writing test?

Still, I’ve forged ahead, gotten myself a Skype handle, done my best to maintain eye contact, cleared the junk mail avalanche that piled up behind me, and focused on the interviewer rather than the fact that I’m beginning to resemble the Dowager Countess from Downton Abbey.

When one editor I Skype-interviewed with appeared to have a stroke, her words slurred, her body listing to the left, while discussing the weekly mortgage rate analysis feature I’d need to write, I assured myself it was merely a cyber hiccup. It was. But still, it’s hard to maintain your composure while debating if you should call 911 to help a stranger who just told you that even if you beat out the 44 other candidates there are no medical benefits.

As each interview wraps up and I’m asked, “So, do you have any questions for me?” I force myself not to say, “Yes, I’m wondering if you could get me the name of that paint color is on the wall behind you? I think it would look really sharp in my bathroom.”

I am making progress, but I don’t have to like it. And while I’m annoyed about having to pull myself together and disregard copious wifi-related snafus, I can’t help but be even more bothered by the elephant in the room, which is this: Isn’t this whole video interview just one all-encompassing way for an employer to discover my gender, race, and age without coming right out and asking, which, was still illegal the last time I looked. According to the U.S. Equal Employment Opportunity Commission, employers shouldn’t be asking for a photo of an applicant, and yet, there I am, appearing on their screens where they can assess all that and how often I dust.

Even though I’m not interviewing for a client-facing role and, in many cases, won’t even get a byline, employers probably want to make sure I don’t have an enormous facial tattoo that could distract me from the work at hand. At least that’s what I tell myself as I log in and repeat, “Can you hear me? Wait, I think you’re frozen,” and long for retirement.
Subscribe to On the Balls of Our A$$es