A few friends have asked if I've given up writing this blog. While I definitely hadn’t intended to, I haven't had much free time lately. As I've mentioned in other posts, I've been freelancing whenever and wherever I have the opportunity.

Initially, I felt like I couldn't turn down any work in case one of us found ourselves unexpectedly out of work again. Then, I just kept it up because I enjoyed having an opportunity to write on a variety of different topics. Now, I’m doing it more than ever because I found myself in need of a big ole influx of cash. Let me explain.

In November, my husband and I went to a fundraising event which we attend every year. In the name of a worthy cause, I often find myself spending the silent auction portion of the evening bidding on items we definitely don’t need. Think: shopping carts/chair caddies you can take to the beach (??), skydiving lessons, a bouquet of fast food gift cards … you get the idea.

But when it comes to the live auction, Katie, bar the door, the feeling I get from raising that bidding paddle must be akin to the first-time high addicts speak of. Apparently, live auctions are my heroin. My stars, what a rush!

Last year, after a few glasses of white (and probably red, too, if we’re being honest) wine, I found myself bidding on the chance to meet the cast of some NFL program that I thought the boys might enjoy. I was outbid, which was fortunate, as the final offer came in at more than the balance of Prince George's trust fund. Think that chastened me? Not quite. Next, I thrust my paddle into the air in an effort to win (or just up the price ... who can say for sure?) a trip to Sea Isle, Georgia.

All the while my mother glared at me from her table. At the time, my husband was still out of work, so we barely had the money for an extra pizza, let alone a four-day trip purchased on a Merlot-fueled whim. Mercifully, other people outbid me again. I did my best “Aw shucks!” while my heart hammered in my chest and I felt irrationally grateful I hadn’t actually “won” anything I’d just bid on.

So this year, fast forward to the live auction when they announce a trip for two to Cancun, hotel stay for five nights and airfare included etc. I was certain I could bid and experience that same old thrill without actually having to cough up a credit card at the end of the night. (I think you know where I’m going with this … )

SO when the price gets to $3,200, I'm thinking, "I'm totally going to drive up this bid!” and raise my number high in the air. But damned if no one else wanted this item!  The auctioneer did the whole, “Going once, going twice, do I hear $3,300?” Crickets. Pin-drop silence. That’s all we heard. I looked over and expected to see my husband Google-ing divorce attorneys. Instead, his face registered half-shock, half-evil-death-stare. Sadly, nothing about his expression said, “Wow, Liz, randomly buying a trip to Mexico seems like a great idea!”

And before I had a chance to say anything to him, like, “Please don’t murder me in my sleep,” volunteers with the organization were tapping me on the shoulder demanding my credit card. Because my “fancy” purse is so tiny it only accommodates lipstick and a driver’s license, I had the added discomfort of asking my now-scowling husband if I could “borrow” his plastic to pay for my impulse purchase.

My cousin, who’d been sitting to my right, had disappeared momentarily. I knew if she’d been there just moments earlier she’d have slapped my paddle-raisin’ arm right back down to the table where it belonged. When she returned and I told her what she’d missed, she generously said that if my man refused to go she’d be happy to kick in $1,600 and travel with me. (Now that's a good cousin!) She told me to justify it this way: "Think of it as six trips to Costco.” When I attempted this later, my husband only said, “What the hell is your cousin buying at Costco??”

During what could best be described as a “tense” ride home, I tried to recall any of the details I’d heard about the trip but kept coming up empty. What if we were going to be staying at Uncle Paco’s B&B, miles from civilization, with only donkey-grooming as an activity? How could I have not gotten any information? How could I have been so reckless?? “What the hell was I thinking?” played in a loop in my head throughout the night as I woke every 30 minutes and recalled my “win.”

After the initial shock wore off, I began to look forward to this getaway but wondered how my 70-something-year-old mother could possibly watch the boys for five nights (in a row). Though I knew she’d offer, it seemed downright cruel and potentially fatal. So, at the same time I was pondering how to handle this, I received an email from a former colleague asking me if I could help her out by freelancing. Boy, could I! Taking on a couple dozen assignments, I’d be able to pay for the trip and add the boys along, making it their Christmas present. Exciting, right? Well, it sounds better in theory. In reality, I've spent the past few months researching and typing my way to a nervous breakdown.

The good news is, we're staying at a known hotel chain. While it's not the Four Seasons, we should have the usual amenities like soap and nearby ice machines. And, as I've told a friend with whom I already shared this sordid tale, I should now be able to buy rounds of margaritas for everyone at our pool's swim-up bar! 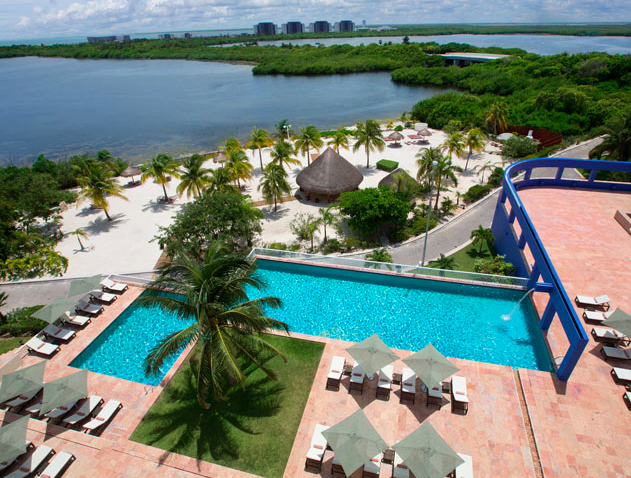 While it does make for an amusing anecdote (for everyone but my husband), I have to say, even if this trip is like my own version of Fantasy Island, in which I can sleep late, read a book, and convince my children to apply their own sunscreen, I think I've learned my lesson. If I can somehow avoid my husband straight-jacketing me for this year's event, I'll be sitting on my hands through the live auction portion of the evening!