When Your Career Resembles Reality TV ... Minus the Limo Ride

A dear friend of mine has been caught in what has to be "the most dramatic company restructuring ever!" After weeks of gossip and speculation along the lines of "You'll be given our reorganization chart. If you're on it, congratulations, you are in. If you can't find your name, please pack your Dilbert desk calendar and go," he received the mysterious and long-awaited diagram but, alas, did not find his name.

So, he'll spend the next two months lame-duck-ing it and then he'll be "free" to start the arduous process of looking for his next gig.

Needless to say, I feel for him. The whole unfortunate handling of his lay-off reminds me of the bizarre way my colleagues and I were let go, which went a little something like this: You're busy trying to do your job yet you know any moment you could be invited to join a conference call that may or may not spell out your termination. Great for morale, right?

And we spent months like that. Until that email finally came and you dialed in to a conference call only to be told: "In the next five minutes you will receive an email. In that email you'll find a phone number. Half of you will call in as part of our "go forward team." The other half will be connected to an HR rep who will walk you thru your final steps. Good luck!"

It's like the equivalent of toiling away only to eventually find that instead of job stability you're greeted by the disinterested Phil Keoghan, host of The Amazing Race, flanked by two Department of Unemployment reps standing next to a box that contains your COBRA paperwork.

He'll be frowning and in a monotone, void of any emotion, say something like, "I'm sorry, but despite working long hours, being plagued by hundreds of contradictory emails and enduring endless meetings in which people overused the terms 'bandwidth,' 'drill down,' 'deep dive,' and the always loathsome 'synergies,' we've found you infinitely expendable. Yet, at the same time your contribution has been invaluable (see, more contradictions!) which is why we're going to allow you to keep the outdated printer/scanner we gave you six years ago. You're welcome!"

When you look at the paperwork, almost as thick as your thighs will be when you're at the height of the tiramisu addiction that will grip you approximately three months into your job search, you can't help but wonder why they didn't love you.

You shake your head in disbelief on the way home. At stoplights, you'll glance down at the cardboard box that contains your Iggy Pop bobblehead doll standing on the stapler you took just to be spiteful. Yes, your heart is broken, but unlike The Bachelor, you're not in a limo. No one is filming you unless you count the teen in the SUV next to you capturing the aftermath of a fender-bender that's just been moved to the shoulder. You're in your own car.  The lease is almost up. You're over your allotted mileage. And the "check engine" light is on. Cue the tears.

But! On a brighter note, finding a new job -- after the madness of completing an online application (where you'll be forced to reveal your personal theme song), finding a decent interview outfit, and making sure your interviewer is aware of the interview -- can present a whole host of new opportunities.

In a strange twist of fate that ties back in to reality TV, I recently had the pleasure of breaking bread (or in this case, pound cake) with a second Top Chef contestant. At my current position, I was invited to test out some new and delicious dessert recipes created by Antonia Lofaso, restaurant owner and Breyers spokeswoman, in a stunning loft in Chelsea. (I view this as the pot of gold at the end of my tear-stained-Chardonnay-guzzling-while-wearing-the-same-outfit-for-48-hours-straight unemployment rainbow.) 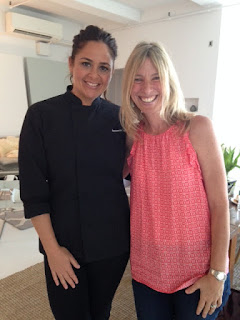 Antonia was gracious and lovely. Plus, she was stuffing me with all-natural vanilla ice cream topped with fresh fruit --  how could our meeting be anything less than magical? She demo'd her new creations, which were inspired by her childhood and also her trips to the Caribbean with her daughter.
While they were all amazing -- and I'm not just saying that because I received an insulated tote bag and five coupons -- the real show-stopper was this Peaches & Pound Cake Sundae. (See recipe, courtesy of Breyers, below.)
So what I'm saying is this: Finding yourself unemployed is no picnic, no matter how you're told. But at the same time you never know what lies ahead.
You may just end up trading eating tiramisu alone in your basement wearing sweatpants for sampling cool and creamy confections in a gorgeous setting with a chef you've long admired. 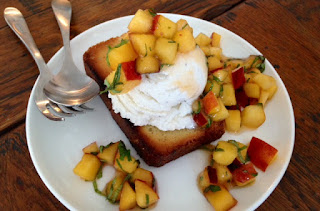 To make each sundae, place a slice of toasted pound cake on a plate, then top with a scoop (1/4 cup each scoop) of ice cream and cover generously with macerated peaches.