And Then It Call Came Together

So, I finally have a few pieces of good news to share. No. 1 my husband has accepted a job offer -- a good one -- for a position that will utilize his skills and not require him to wear our son's clown costume -- a fate that was looking like more and more of a reality as the months passed.

How did he get this gig, you ask? Remember when I said he was connecting with just about everyone he'd ever been in the same room with? Well, a LinkedIn connection put him in touch with a guy who put him touch with the HR department and after a merciful two interviews and a 4-hour writing test, he received the call that has pulled us back from the brink of despair.

It didn't come a moment too soon as my face has become so furrowed and jowly from worrying, I'm beginning to resemble a damn shar-pei (OK, wow, I just had to look up that spelling -- not what I was expecting!)

Also tough to stomach were the strange looks from people who love to ask, “How’s your husband?!?!?” with their eyes bulging out of their heads. Just before he received the offer, I was riding the train with a woman who inquired about his job search and made a face as if she'd just heard he's been on a bank robbing and baby murdering spree.

Yes, he lost his job and yes, it has been like one long, painful root canal of a year (and three and a half months, but who's counting?) but he doesn't have a terminal illness nor is he on skid row, so let's not act like he's Jeffrey Dahmer with a case of Ebola.

These are the same folks who, after asking, never once followed it up with a “What can I do to help?" or "Send me his resume, I’ll pass it along!" (If you'd like to bask in the dim glow of our misery and you have no interest in helping us career-wise, at least have the decency to bring me a layer cake, is all I'm saying.)

He'll start in a little over a week and while I expected him to take a victory lap around our house,  he says he won't really believe it until he's seated at his new desk. He's also been reluctant to tell anyone about it until his background check gets the "All clear!"

I've tried to tell him, "Unless narcolepsy and leaving every freaking light on in this house have become felonies, I think you're all good." Still, all this waiting and hoping for other opportunities to pan out has made him gun-shy and it seems hard to believe that this grim period might be coming to an end. Can I really return to making extravagant purchases like windshield wiper blades and children's shoes? Let's hope so.

And in other news, I finally had my night out with Chew co-host Carla Hall. The Top Chef finalist was absolutely lovely. (How can you not bond with someone who orders beer battered string beans and asks for additional slices of bread to accompany our burrata appetizer?)

The woman who stole my whisk didn't show which was a plus because I know if she had and I didn't shake her down, I'd never hear the end of it from my mom. My former rival Mrs. Baltimore was there and as bubbly as ever. We dined at The Smith near Lincoln Center and the food was delicious.

Carla was delightfully down to earth and I learned she practices yoga 5 times a week and was heading home to sign copies of her cookbooks to sell on HSN this weekend. While I didn't have much to add on some of the conversation topics: stepsons, spouses' ex-wives, textured hair challenges, (I'm lucky I can collect my wispy strands (see photo below) into a skimpy ponytail),  I did get to ask a few behind-the-scenes Top Chef  & Chew questions and find out the latest on Southern Kitchen, the restaurant she hopes to open. (She's looking for the ideal location but has the menus ready to go -- you heard it here first!) 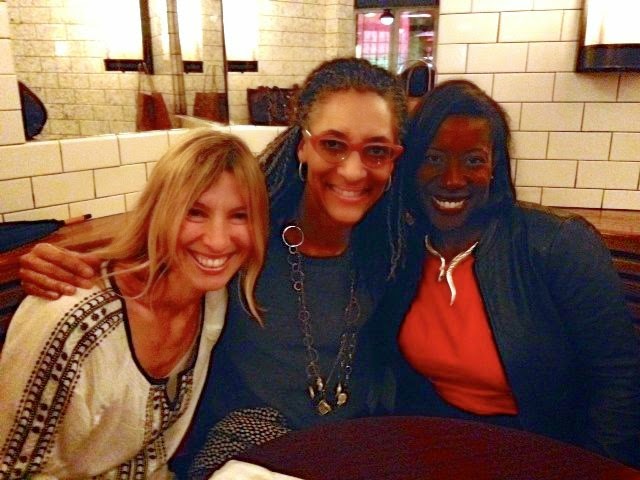 All in all it was a lot of fun and Carla treated us like old friends she hadn't seen in while. She even brought us boxes of her petite cookies in their pretty brown and pink packaging! (As Ina Garten would say, "How bad can that be?")

At the risk of jinxing us, I'd say things are looking up at long last. Thanks to everyone who has come along for the wild ride!