Eight months after "winning" a Girls Night Out (GNO) with former Top Chef finalist Carla Hall on the ABC daytime talk show The Chew, I've finally heard from a producer about my "prize."

But ... what was once billed as a fabulous night on the town has undergone a dramatic downsizing. Perhaps she was delirious from the euphoria of celebrating her 50th birthday? Or maybe the blaze of the cameras during the May taping proved disorienting? Either way, Miss Hootie Hoo seems to have forgotten her promise that the gal who impressed her most would join her for an amazing excursion that included mocktails and dancing followed by enough desserts to kill your average diabetic. 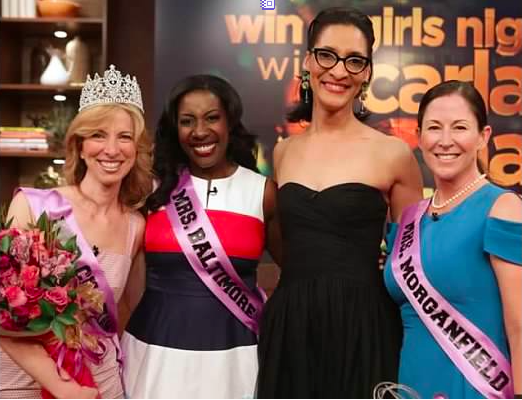 What I'm now being offered might as well be a one-way ticket to the Baltimore Arby's where Carla got her first taste of horsey sauce, but I'll get to that in a moment. First, let's do a quick recap of the road that's led to my now-lackluster reward.

Though the show aired May 12th, the entire summer passed and I didn't hear a peep as to when this very special evening might occur. Then, fall arrived -- still no word about the night out -- unless you count the relentless questioning from friends, neighbors, family members, and curious strangers at my local Shop-Rite who were all eager to hear where Carla took me.

Um, well, it hasn't happened yet, I'd explain (repeatedly!), and in the awkwardness that would typically follow, I'd find myself offering to make the inquirer some of the coconut macaroons I'd prepared on the show in the hope that they'd just go away quietly.

True story: Even the woman who waxes my eyebrows, a Chew devotee, asks me monthly, "Did have you have your night out? Did they at least send you anything yet?" Luckily, my eyes are closed so I don't have to see the anger in her usually sweet face when she shrieks, "ABC has lied to you!" (Let me point out that English is not this woman's first language, but she knows what she heard on TV and now she's pissed!)

Speaking of my rabid champions, as time has passed, my mother, with the rage of an Ultimate Fighting champion, began threatening to call the network and demand answers. "I'll hire a lawyer! Do you want me to hire a lawyer?"

"No, and that attitude pretty much summarizes what is wrong with America," I want to tell her but don't. While she is two generations late to the helicopter parenting party, I appreciate the concern but find it unnecessary.

My father, equally combative, suggested I tell them I have evidence that Jeopardy is rigged (wouldn't all the Arthur Chu haters love to jump on that bandwagon!) and I'll go public with it if they don't make good on the promised GNO pronto.

"They don't know that's all you've got," he said guilelessly.

"As much as I'd love to start working on Quiz Show: Part Deux, with my husband out of work, a relatively new full-time job, and three kids, I'm going to have to pass," I told him.

"Suit yourself," he said, which I've learned over time is basically code for "OK, but I think you're an idiot."

So, after all this, I heard from a producer in November who told me they'd set the date for Tuesday, Jan. 13th, but she had no additional details. (In other words, "If you were to equate the level of thought and effort we're putting into this with cooking a meal, we're Ramen noodling it, sister!")

With the 13th fast-approaching, I was beginning to wonder if the whole shebang was still a go when I heard from a different producer this past Tuesday. She said the Girls Night Out was now lunch, starting at somewhere between 1:30 and 1:45 p.m. at a restaurant right near ABC studios, which is 40 blocks north and several west of my office.

I know that might not sound like a deal breaker to some, but I should mention it's been Fargo, North Dakota-freezing here. So, at this point the only people I'd walk all over Manhattan and then take a 20-minute subway ride (each way!) to see are: God, my children and Paul Westerberg. Not necessarily in that order.

The first friend I told about my revised prize immediately texted back, "That's not a night out!! That's not even a normal lunch hour starting time!" Yes, I'm aware of that.

When I told my brother that I wouldn't be partying the night away with the woman who requested that I dance -- not once but twice -- on national television -- an act I'm still trying to live down -- he suggested I really chew them out. My children have implored me to go, order everything on the menu, and then ask for all the doggie bags I can carry. (Thankfully, I have this clever entourage to bolster my spirits.)

Of course, in the grand scheme of things, this whole situation isn't a huge deal. I completely see the #firstworldproblems-ness of this dilemma. Anyone who's been reading this since my husband and I were laid off within six weeks of each other knows I've got bigger fish to fry -- like Moby Dick-sized -- for anyone in need of a visual.

But ... then I got an email yesterday telling me to arrive at 2 p.m., and check in with a producer, whom I suspect will instruct me never to make direct eye contact with Ms. Hall. It further stated that while they will pay for lunch, "So sorry, no booze. Plan to stay an hour, maybe two."

Wow. Not even a glass of house chablis?  What if I wanted a Coors Light to wash the mini corn dog trio platter I spied while perusing the menu? Geez Louise.

While initially I was game for anything, now this whole thing just strikes me as unbelievably cheap. I'm sorry, but isn't this the same network that pays Whoopie Goldberg $5 million annually to break wind in front of a live studio audience? (Seriously, how does one get that gig?)
I'm having serious reservations about even going at all. If I do, I'll probably have to take a half-day off and miss two meetings, leaving me to wonder if it's worth it and if Carla will even show up at all. Let's just hope her Kickstarter supporters fare better.

So, readers, I put it to you: Should I go or just hang up my tiara and put this whole episode in my rearview?