Haggling Over Butter and Other Depressing Updates

We've just passed the 11-month anniversary (but who's counting?) of my husband's lay off. His severance package will probably run out before I finish this post. So things have definitely been a little scary here and I don't mean in the fun, Halloween-scary kind of way. This is more of the "Here's Johnny!" Shining off-the-rails-crazy kind. 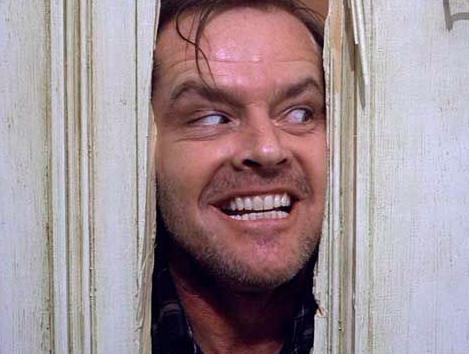 He's had several job interviews but so far none has yielded even a second meeting and, thus, he's been on the receiving end of those soul-destroying "We've decided to move forward with a more qualified candidate" emails. Ugh. Morale is plummeting faster than our savings account balance and we've been forced to do some unpleasant things.

While we haven't had to turn to drug dealing, pole dancing, or Labradoodle breeding just yet, (mainly because other, more qualified applicants beat us to it-ha!) I have found myself haggling over butter prices at my local market.

Yes, I'm not proud of this, but it's true. A pound of unsalted butter is now going for $6.99 (as opposed to the $2.49 sale price I can usually find) at my local Shop-Rite. So being the savvy shopper that I am, I refused to purchase it and instead combed through other markets' online flyers to find a better price. (If you're going to use the "time is money" argument on me here, I get it, but at least this is taking my mind off the fact that there's a strong possibility my husband will have to work as a mall Santa this year. Heck, that's if he's lucky enough to land that gig! I'm sure shopping plazas across New Jersey are teeming with non-practicing Jewish Santas. Which reminds me, I should look for cheap deodorant while I'm skimming the aforementioned flyers. Those red velvet suits and white downey beards can make you sweat like a young Chris Farley.)

But back to the butter. Now, despite my undying love for baking, normally I'd sit it out and wait 'til the following week to make my purchase in the hope that prices would fall. But ... I NEEDED it you see as I'd foolishly agreed to send in 28 homemade, individually-wrapped Rice Krispie treats for my 4th grader's Halloween party, and believe me, you do not want to cross these PTO mothers by shirking your responsibilities just because bars of butter are now more expensive than gold.

This stay-at-home mafia-style crew will start rumors that your child has lice, ADD, and/or a burgeoning video game addiction, making your's and your child's life hell until you decide to move or volunteer to co-chair the next Basket Bonanza. 'Nuff said.

So I found some butter -- 1 pound for $3.50 -- not great but what choice did I have? I drove to the store but when I got there, it, too, was close to $7! Could I have been looking at an old flyer? No, I'd checked the dates. (Can you tell I'm really losing it?) So I went to the courtesy desk where a girl who appeared to be approximately one third my age would've been happy to see me shoplift this pricey box of lard if it ensured she could keep flirting with a young fella from the deli department.

I calmly and pleasantly explained the situation because when you're battling over the price of butter, it's hard not to come off like someone who's just minutes away from appearing on a very special episode of COPS.

Mercifully, she could tell I was already close to becoming unhinged so she was all, "OK, sure, uh-ha, take it. $3.50? Sure, no problem. Oh, honey, have a good night."

I wanted to say, "Please, I'm not making this up, I know what it said in your flyer, and while I can afford $7 butter, at least for the next few hours, on principle, I just can't pay that." But I thought it best to just leave.

When you have two incomes, you might take notice of rising prices but you don't take it as a personal affront the way you do when you're down to just one (small) salary. For example, earlier this year, when I was still optimistic about our future and hope was more than just the name of my neighbor's missing cat, I'd noticed that the pretzels I usually buy for my son to take to school for snack had gone from 99 cents to $1.49 without even stopping at a reasonable $1.19.  I was annoyed, yet the full "Holy Toledo, how am I going to feed these kids??" impact hadn't hit me the way it does now. And yet all the media wants to focus on is whether Kylie Jenner has had lip injections or if that pout can really be achieved through expertly-applied lip liner, while food prices soar.

Would I have noticed this 50% increase if my husband still had a job? Yes, probably, but it would bother me 50% less than it does now.

It's just scary out there. We know we're not alone. Heck, even Tori Spelling is being forced to sell some of the trinkets she's been stowing away (er, hoarding) in her Fantasy Island-sized storage facility. Yes, I'm watching True Tori just to feel better about everything, and, sadly, it's working. And, heck, it's cheaper than a therapist's co-pay, and I should take full advantage while we can still afford cable TV!