I got a job! Yes, you read that correctly. I. Got. A. Job. Strike up the Hallelujah chorus!

It's hard to believe that the continuous searching and scheming to find clever answers to questions like "If you were a bird, what kind would you be and how would you distinguish yourself from other birds on Pinterest?" might really be coming to an end.

I haven't written anything about this opportunity because it really seemed so perfect for me that I almost didn't want to jinx it. I'll start at the beginning:  On one of my hourly sweeps of the job boards several weeks back I saw a posting for Lifestyle Writer for a mom-centric website on LinkedIn. (At the time, only 32 other people had applied, which is like NO ONE by LinkedIn applicants standards.) So I fired off an email with my resume and crossed my fingers.

A week later, I received an email from a human resources representative and we set up a phone interview. She impressed me immediately by answering all my questions before I could even ask them. We discussed the total compensation package, which was great because, as I've mentioned before, who wants to submit to rounds of interviews only to find out your babysitter is making twice that wage while watching Sam & Cat in your basement and eating all your Klondike bars?

Next, I went into Manhattan for an in-person interview on the day the U.S. played Germany in the World Cup and the city stood united and electrified by a palpable sense of camaraderie. I found the building-located just minutes from Penn Station (score!)-and even had time to sit on the steps of the New York Public Library, where I'd sometimes meet my cousin for lunch 20 summers ago.

After doing my quick shoe switcheroo in the lobby, I rode the elevator, nervously praying that this one would go well (and that my Spanx-which, sadly, are becoming a staple, were not visible below my hemline).

If I'd been in my own Nickelodean sitcom, when I stepped off the elevator into the lobby a gong would've sounded, as in Swank-o-Rama! Super cool couches, enormous TV, board games on uber-hip coffee tables. This was a far cry from a few months back when another elevator spat me out into an office space that looked and smelled a lot like someone's 1970s rec room after a flood or perhaps a dog routinely relieved himself in a corner.

I met the HR rep in person and she was just as thorough and professional, which was a big relief and a welcome departure from the interview I'd had just days prior with a woman who not only forgot I was coming but also appeared to be narcoleptic.

Next, I spoke with the editor I'd work for if I got the job. She was smart, funny, full of life and, despite her title, she seemed very down-to-earth and real. Unlike another editor I met earlier in my search who handed me his business card and said, "This is inaccurate. I'm now the SENIOR managing editor," and I had to bite my tongue to not say, "No one but your mom cares about that, son."

She was so cool, in fact, I had to fight the urge to tell her I could see us becoming good friends, eating fancy salads together and sharing a bottle of chardonnay while making fun of what our husbands sound like snoring and planning our next trip to IKEA (something you could really only do with a true BFF).

So fast forward a few days and everything was going swimmingly in the process...until squirrels gnawed their way through our fiber optic cables and left us living like an Amish family - no TV, no phone, no Wifi - just as I was waiting to take a four-part editing/writing test. Like, could I even make this up? Thankfully, the editor was incredibly understanding about it, which was amazing considering who wants to hire someone with shoddy technology for a position with work-from-home potential?!?

I hustled up to my local library since our whole block was out and took Part 1 - the only timed portion - amid screaming toddlers and the nannies who tolerate them. I was able to work on the other sections throughout the weekend while I tried to not get my hopes up too high that this might finally be "the one."
When the HR rep called with the offer, I had to clutch my toaster oven to keep from collapsing in relief. My checking account has dwindled to the point I'd begun to fear I'd have to resort to coloring my own hair (and risk looking like Carrot Top) and waxing my own eyebrows with chewed up hunks of Juicy Fruit before any future interviews. 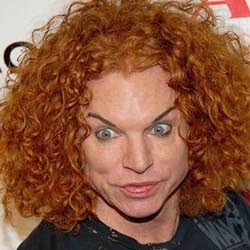 I am thrilled to embark on this new career and I am beyond ecstatic that I no longer have to accept unemployment. Going to the ATM to withdraw the funds made me feel so ghetto, I kept looking over my shoulder expecting someone to jack my Odyssey.

I have been awed by the kindness of strangers (Carolyn K., thank you!) and the ignorance of friends who've had the gall to whine about being limited to taking only two fabulous vacations this year while my family's on the verge of eating Fancy Feast.

The only unfortunate piece is that my husband had received an email the day before letting him know that he would not be moving forward after two rounds of interviews for a job he wanted. But if I have learned anything from this process, it's that so much is out of our hands - from being let go to being hired. Again, much like dating, you have to hold out to hope that the perfect match is still up around the bend and eventually you'll find each other.