So, I just wanted to share some of the wacky things I've experienced since my appearance on "The Chew" aired a few weeks ago.

A couple of my enterprising aunts have suggested that I attempt to parlay my 15 minutes of fame into a new career.

"You should try to get a car commercial next," my mom's sister said. (Yes, it does sound more like an idea my 8 year old might share). "Maybe something like the Toyota Camry? I think that probably pays a lot."

Sure, that seems like a natural progression, right? From cooking show contestant to auto commercials in just two short weeks! Sign me up! While I'm at it, maybe I could replace Vanna White?

Another aunt recommended that if all else fails (and it seems like it has) maybe I could find work as a hand model, because, get this, my hands look so "natural." Well, I'd hope so, they are my hands. Though, honestly, the likelihood of my having any success at this is about the same as George Costanza's.

Another funny thing I've encountered is the universal outrage of friends and family over one of my opponents snatching my scepter/whisk trophy. Granted, I had wanted to mount the three-foot utensil over my stove as half-decoration-half-conversation piece but I was willing to let it go in the interest of good sportsmanship. But now, good, wholesome, God-fearing women are p!ssed and asking me what I plan to do about getting it back. (Still plotting my reconnaissance mission, Ladies!)

Though technically I "won" the cook-off, Carla Hall said we were all "winners" and, as such, we'd all be partaking in the coveted Girls Night Out (GNO) - a move that has been polarizing among my supporters. Some say it was a gracious gesture and that I'll probably enjoy the evening more in the company of fellow home-cooks. Others argue that this kind of "t-ball-everyone's-a-winner" mentality typifies what's wrong with America today.

So far no real details about what this GNO will entail have emerged - another sticking point. My mom has asked, oh, say, every 20 minutes since the taping wrapped, "So, have you heard from Carla!?! When are you going out?"

As the days pass and no one gets in touch, she ups the ante. "Ok, so maybe Carla doesn't want to go out with you. Tell them it's ok but you'd like a gift certificate for a restaurant that you could use with your husband," she says.

A week later..."You know, it's not right that they used you like that. I've been thinking about it and a night out means a night out. You should get more than just dinner. I hope it also includes a Broadway show!"

Soon, she'll be demanding a lock of Carla's hair and one of her kidneys.

But she's not alone. Others have asked when and where I'll be going and I even promised a friend I'd let her in on the location so she can organize a rescue posse and follow us in case the evening's a bust.

These continuous inquiries ultimately prompted me to contact a producer who told me the night out will probably happen "next season," whatever that means. I have to say, at this point I'm just grateful that my pitiful dance moves didn't land me on "The Soup" - not that I wouldn't love to cross Joel McHale's radar.

But the most common reaction I've gotten is, "Can I have your recipe?"

Sure, here it is: (and in the interest of full disclosure, I got it years ago from a neighbor, so technically it's not really mine...) 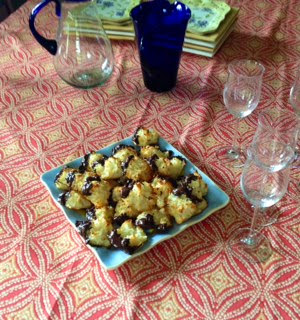 
Directions:
1) Preheat the oven to 325 degrees F.
2) Combine the coconut, condensed milk, and vanilla in a large bowl.
3) Whip the egg whites and salt in the bowl of an electric mixer fitted with the whisk attachment at high speed until firm peaks begin to form.
4) Fold egg whites into the coconut mixture gently.
5) On sheet pans lined with parchment paper, drop 2 teaspoons of batter.
6) Bake for 25-30 minutes, until tops and bottoms turn golden brown.
7) Cool on wire racks.
8) **Optional: Melt Semi-sweet or milk chocolate and dip edges of cooled cookies - Serve with fresh raspberries or strawberries.