I Enjoy Suspense as Much as the Next Guy, But...

Things were off to a great start. I was able to walk to the train, buy my ticket, hustle two blocks to the correct subway, board it, navigate Manhattan's underground labyrinth and emerge in the correct location - which is the closest I'll ever come to feeling like Lolo Jones.

I met with the man who would be my supervisor and he seemed pleasant...initially. Then I was given a writing test, which, compared with the writing and editing test I took in February, was like adding 2+2 after sitting for the CPA exam. While I worked on it, two additional editors, who seemed very nice and helpful, came in to discuss their roles and my qualifications. Both said they really enjoyed their work. It felt like everything was going fine. Sure, my shoes were pinching like lobsters had attached themselves to my feet, but other than that things were moving along swimmingly.

Then the first guy returned and he was markedly less friendly. I'd like to think that my judgment was impaired because I hadn't eaten anything. (The banana I'd brought with me didn't fare well in transit and ended up looking as if it had been run over by a crosstown bus.) But I don't think it was in my head. He was very aggressive and all, "So, why do YOU want this job?"

I don't know, because I'd like to collect a paycheck and not have to hold up a pharmacy the next time one of my children needs an antibiotic? Also, it's in my field. I wasn't leaving journalism behind to explore spelunking. I couldn't tell if he'd taken on this new tone in an attempt to rattle me or if maybe he'd had it from the beginning and in my jubilance at not being attacked by pigeons outside of Penn Station, I'd overlooked it. I'd recently read How to Spot a Good Boss in an Interview on The Muse.com and while I found it really insightful, most often I try to go with my instincts. Either way, the jury's still out on this one.

But here's where I feel like I was a bit misled. When I asked him when they were looking to fill this position he said he had additional candidates to interview this week and still more next week. And then, get this, "the finalists" would be brought back in for another round, he said. Finalists? What is this, the Miss America pageant?

I wanted to tell him, listen, it cost me $25 and 5 percent of my soul round trip just to get here. I've met three people, rewritten six stories, crafted two tweets, and accepted a homework assignment, I refuse to have my second dance-off of the month to "win" something. 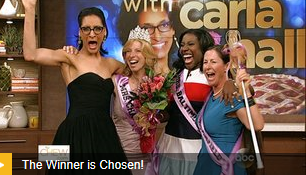 Plus, I had been told by the "talent coordinator" that the company was looking to move quickly as the person who'd held this coveted spot had been promoted and the vacancy was creating a strain on the team. She also said that I'd meet everyone in one day to save us all some time. "Perfect," I'd said.

Not that I'm completely ready to make a decision if the stars aligned and I received an offer, but still I like the idea of a "one and done" interview. When I was just out of college and going for a job at Merrill Lynch, I remember speaking with everyone but their mascot, the bull, and a security guard who was using the toilet. My point is: whether you like me or not, figure it out during my four-hour visit, please.

One of the men with whom I was supposed to meet was MIA. Now that messes with your head, doesn't it? At that very moment was he being dazzled by someone from this throng of "other candidates?" Was he sleeping off a hangover in a coat closet? Or, was I not worth his time? I was told if I made it back for the next round I'd meet him. (Ah, the man behind the curtain.)

This leads me to wonder, how many rounds of interviews are customary these days? I've previously lamented the fact that it seems employers now ask everything from your personal theme song to how you'd solve the national debt crisis - in 160 characters of less. Why? Probably because they've read recent reports that state, according to data released by the Bureau of Labor Statistics, in 20 percent of American families in 2013 not one member of the family worked. We're desperate and they know it. So, of course they feel they have every right to ask if you'd be willing to tap dance with polar bears through rings of fire at their annual winter gala.

After discussing my resume, including the gaping hole in my employment, my writing samples and just about everything short of alternative uses for club soda, my would-be boss then said, "Is there anything else you'd like to tell me about yourself?"and I wanted to say, "Well, some of my new hobbies include drinking alone, looking under couch cushions for change, and reminiscing about a time when we could afford avocados," but I sensed that wasn't what he was looking to hear. A dear friend of mine suggested that going forward I answer this question by saying, "Did you know I have a tiara?"

Side note: I have another really smart, capable friend who works for a company that is moving out of state during the summer. She is also interviewing for a new job. After a super-long trek into the city on a rainy day, she knew the position she was going for wasn't "the one" and immediately took herself out of contention. Now I've always admired this friend for her incredible intelligence and cut-to-the-chase direct and honest approach to life, but this was bold!

As the bills continue to roll in, I feel like my already-toothpick-thin line between dignity and desperation is growing ever slimmer. It will be weeks before I find out if I've made it to the next round. And if I do, will I be told to wait for a call to see if I make it to round 3? Until then, I will continue to apply for other jobs, drown my sorrows in tiramisu, and polish my tiara.