And the Winner Is...

If you'd like to watch me make coconut macaroons and a fool of myself on national television, tune in to "The Chew" Monday at 1 p.m. Eastern Time on ABC. 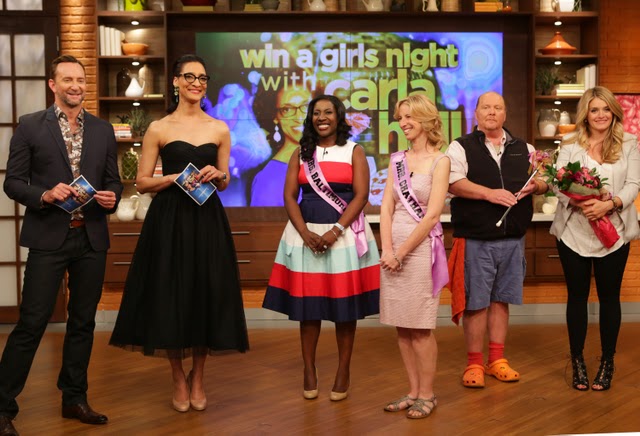 If you're wondering if I pulled off the dance move I had been preparing - a replica of my husband's patented bass kick which appears on dozens of wedding videos to the delight of grooms and the dismay of brides up and down the East Coast - sadly, despite my best efforts, it was more Elaine Benes than David Lee Roth. And if you watch until the very end, you'll even get to hear Carla Hall, the woman I was trying to win over with my baked goods and booty shaking, mock my not-so-infectious grooves.

I'd like to tell you who won but because I signed a waiver that I merely skimmed, I'll hold off on that for now. But I will share just about everything else. Let's begin.

I faced fierce competition in the form of two Southern gals who were whipping up clam dip and ribs. Now I know Carla, who hails from Nashville, likes her comfort food, but because my deodorant only lasts about four hours max on a good day, I tried not to panic. The producers, and there's a sea of them, were incredibly friendly and helpful and once my fellow contestants and I arrived, we were whisked into the green room, which really was green!

From there, we ran through how things would proceed and it slowly began to sink in: I have to bake and talk simultaneously in front of a studio audience. (And not the baking and talking that happens at home, which goes a little something like this: "Did you finish your homework? Hand me that butter. No, you can't help if you just picked your nose. Go wash your hands. You cannot lick the spoon and then stick it back in the batter. Yes, you can have some chocolate but only if you leave the kitchen. NOW!")

Just when I was on the brink of bolting and hiding behind a hot dog truck on the corner of 66th and Columbus, I noticed a man staring at me. Like really staring. I looked around and saw he was surrounded by a palette of eye shadows. That's when I realized, he's the make-up guy, and boy, did he have an "Oh, man, I've got my work cut out for me," look on his face. I wanted to tell him, "That's right, I've barely slept since 2002, when my first child was born. Can you fix it?" But after just a few minutes in his chair, the dark under-eye circles that have become as permanent as freckles magically disappeared. (I asked if he'd like to come home with me. He declined.)

Next, we went out onto the set and met the cast, which was surreal. I spoke with Daphne Oz about her baby as if that's something I do every day. Then I was paired with Iron Chef Michael Symon and that's when I experienced something I'd never had before: recipe aphasia. Even though I was staring right at the coconut and condensed milk, I couldn't recall were they sweetened or unsweetened? And how long did these cookies bake? And at what temperature? It was my Cindy Brady-TV-hypnosis moment. At least it happened before the cameras were rolling but it definitely shook what little confidence I had left. We returned to the green room where I had my hair curled until I resembled Hedwig (from "Hedwig and the Angry Inch" as opposed to Harry Potter's owl).

Even though we rehearsed multiple times, it surprised me that very little was scripted. Because I cooked last, I could watch my opponents backstage and cringed when they proved to be folksy and fun-with all the pre-scandal likeability of Paula Deen-whereas I feared I'd be as lifeless and flat as Keanu Reeves.

Fortunately, my cooking area kept my back to the audience so I had an easier time just focusing on my recipe, which I was struggling like an amnesia patient to remember. Once it was my turn, another strange thing happened. Maybe it was Spanx-induced all-over body paralysis, but I almost dropped the bowl of condensed milk right into the coconut. Even though it probably weighed under 2lbs total, it took all my strength not to let it slip from my fingers and then have a complete on-camera freak out. The producers had told us they don't stop the show, so now matter what happens, just go with it. Yikes.

I made it out of the segment with limited stutters and stammers and Michael and Daphne told me they loved my cookies (which, made by the capable hands of the show's culinary team, looked far nicer than mine ever do!) and I asked them to put in a good word for me with Carla.

When it came down to announcing the winner, I could see my poor husband in the audience looking about as nervous as when our boys are up at bat with bases loaded. I was trying to telepathically let him know "It's ok if I don't win this. I just high-fived Mario Batali. My dress hasn't burst at the seams. It's all good."

Quick side note, several years ago, I lost a pie contest at our farmers market. Unbeknownst to me, until my neighbor, who can drink like a Depends undergarments test dummy, told me in front of a large group of women at dinner, our local paper had not only published the results but also printed my name in the "Loser" column. (Was that necessary? Tabloid journalism at its worst!) A woman who attended the dinner then told other women and one day I was walking through the park with my children when a lady I know peripherally introduced me to her husband.

A lightening bolt of recognition flashed in his eyes. "You're the pie contest loser!" he exclaimed.

I'd say appearing on "The Chew" should help clear my name and avenge that loss.

Overall, it was an amazing experience and one I never could've pursued if I'd been working. So, I guess sometimes it pays to be unemployed.