When the Devil Tries to Connect With You on LinkedIn...

While I don't do much on Facebook (see manifesto below), I'll connect with just about anyone on LinkedIn.

I've been that way right from the beginning. Even when I was working, I was always certain that those smiling faces in my inbox were seeking me out to present me with my dream job. (Oh, so naïve and optimistic I was back when I was leaving the house on a regular basis and able to waste money on take-out coffee.) I'd accept nearly every invitation.

Though so far no one has offered me anything more than a "Hey, what's up?" I do have plenty of connections. But to be honest I don't know - as in ... have never met or spoken with ... oh, say, 70 percent of  them. Still, when it comes to the professional networking site, I'm pretty easy. Or I was... until yesterday.

Let me set the scene: I was checking my email as I do every 5-7 minutes now in case a potential employer reaches out before moving on to the 4,872 other applicants. And there it was -- just beyond the two messages from our school district informing me my children's lunch accounts are in arrears -- an invitation to "link" up with my former arch nemesis.

I reeled back in horror as if the devil him/herself had somehow found my email address. In fact, I nearly dropped my iPhone. (Thankfully I didn't because, as you probably guessed, it's uninsured.)

This person - a writer with a competing local publication - went out of her way to be rude to me on countless occasions before I was sh!tcanned. Just when I'd think, "maybe I'm being paranoid," another person would tell me how she'd openly disparaged my then-employer because it was ... wait for it ... backed by a major corporation. (In fact, someone else just mentioned her unprofessional behavior the day before I got this email. The irony!)

And! And! After my old company shed 80 percent of its workforce, what did she do? She wrote a smug article informing readers she'd "still be there for them." (Those of you muttering "bitch!" under your breath have my sincerest thanks.)

I stared at the email and in that moment so wished LinkedIn provided its users with an auto-reply option that went a little something like "Oh No You Di'int!" only loaded with expletives.

Seriously, in a world in which everyone is continuously striving to enhance the consumer's experience, why am I only looking at "Accept" or "View Profile" - where's the button with all the words I can't type in case my kids read this?? I know I have the "Ignore" option on the site, but that just doesn't seem harsh enough.  Am I wrong? 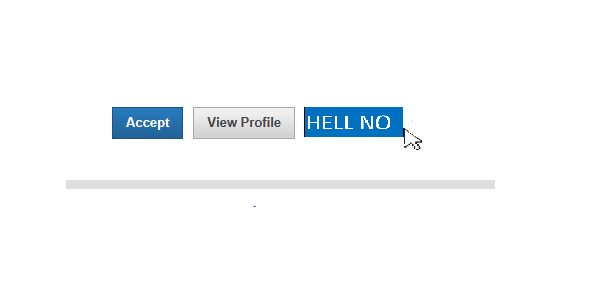 Now I can't help but wonder, if I did accept her invitation, would this grave-dancer gloat via direct message? And what endorsements could we bestow upon one another? "Plagiarism" and "Trash Talking" for her and I suppose she could click "Speechless" on my profile.

Or, was she getting in touch to throw me a bone and ask me to cover a three-hour planning board meeting for $20? See, that's the craziest part, we weren't Dan Rather and Tom Brokaw. We were two moms covering a New Jersey suburb -- why the hate?

For now the reason she contacted me will remain just another one of my life's great mysteries, right up there with why we always seem to have seven tubes of toothpaste open at once. 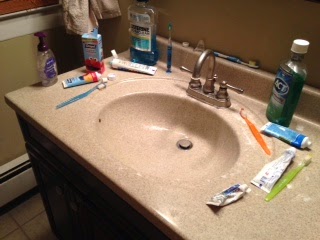 Why I Don’t Facebook: If we haven't been in touch since the first Bush administration, let's keep it that way. (Previously published: summer 2013)
Here are a couple of recurring questions I’ve been facing for the past few years that don’t seem to be going away anytime soon: “Are you on Facebook? Why aren’t you on Facebook?”

This is one answer: I’m afraid of what I might write in the “What’s on your mind?” box on a bad day. A day that might go a little something like this:


3:15 p.m. My son comes home from school selling books, recycled gift wrap and a copy of his holiday concert DVD –which is apparently just as essential as a Grateful Dead bootleg circa 1977.
4:15 p.m. The neighborhood Girl Scout cartel descends on our doorstep (seriously, we must have at least 30 on our block who arrive in rapid succession with hopeful smiles and blank order forms) tempting me with their color-coded cookie charts that make me realize I need bifocals and a home equity loan to negotiate this.
4:45 p.m. The mechanic calls to say that rather than stop at just the requested oil change, he’s gone ahead and replaced the air filter, cabin filter, wiper blades, two tires and my Vanilla-roma freshener tree, rendering the bill equal to the car’s current Blue Book value.
4:49 p.m. I detail all this in that innocent-seeming little rectangular box and send an expletive-filled tirade into cyberspace aimed at a PTO president, the little girls in green and the coveralled man I can no longer trust with my beloved mini-van—a status update that will preclude me from ever working, teaching Sunday school or seeing my nephew again.
That’s just one reason. Also, no one needs to know that I have a deep, abiding love for the ABC series ‘Nashville,’ or that one of my life goals is to die without ever eating at a Taco Bell. (Nothing against the place, but I’ve made it 42 years, I feel like I can safely accomplish it. This is in my wheelhouse.)

Or, one day when I don’t feel like writing or folding laundry and I’ve eaten my way through the 40 boxes of Thin Mints and Tagalongs I bought to avoid breaking the Scouts’ entrepreneurial spirits, (and let’s face it, because I couldn’t see how much they cost) I will take to the Internet and let the world know my top five favorite dog names should I ever get one.

Don’t get me wrong; I can see what the fuss is about. Who doesn’t want to slip down that rabbit hole to see what their high school sweetheart looks like now while simultaneously learning that their kindergarten teacher has discovered the antidote for removing pizza grease from Irish linen?

Of course, the ‘Nashville’-viewing side of me is dying to know more about my ex-boyfriend’s indictment but the yoga-practicing side says, “Let it go. Namaste.”

And, yes, I want the name of your reliable plumber, but not if I have to wade through countless animal videos and inspirational quotes to find it.

Speaking of animals, with so many different friends and acquaintances, aren’t you always at risk of offending someone?

For example, I could easily see myself taking a photo of a freshly-grilled steak, stunning enough to make even the most aloof Peter Luger’s waiter swoon, with a caption “Best. Steak. Ever." But isn’t that like shouting, “In your face, cat rescuers!” to my animal-loving, vegetarian friends?

Here’s another reason I don’t Facebook. (Yes, I think it’s a verb now, like its distant cousin Google.) I don’t want to be tagged in a photo I never knew was taken in which I resemble an aging Tom Petty.

And what about the whole concept of “Facebook Friends” where people you wouldn’t have coffee with now know your whole family is mourning the death of a hamster, which may or may not be responsible for your child’s recent bedwetting setback? As my real-life friend says, “If I see you coming at the mall and I jump behind a plus-sized mannequin to avoid you, we probably shouldn’t be ‘Facebook Friends.’”

I recently attended my 20-year college reunion and I was genuinely thrilled to see some old friends—probably because I literally hadn’t seen some in 20 years. I hadn’t seen photos of them preparing for yard sales; I hadn’t seen them posed with obscenely-large melons or inflatable, light-up reindeer at their local Costco. And I didn’t secretly hate them because I had no idea they’d spent Hurricane Sandy in St. Martin while I worked in my car and tried to think of ways to siphon gasoline out of my neighbor’s SUV.

Last week, amid the heat wave, I went to the grocery store, which was swarming with senior citizens—many of whom were engaged in the age-old debate: tuna in oil vs. tuna in water. I will admit, I did feel compelled to discretely pull out my iPhone and take a photo while they clogged the aisles, inspecting cans for dents as if they had all the time in the world.

“Don’t the elderly have any respect for a #@$! heat-advisory? Stay home, old people!” is how I’d have captioned that photo.

It can be isolating not being on Facebook. Many’s the time a friend has said, “Did you see so-and-so’s new baby? Oh, no, ‘cause you’re not on Facebook.” They then look at me with smug disdain as if I were still using a rotary phone or cutting my own hair. But this, and not knowing that your sister-in-law’s co-worker just won $8 on a scratch-off she bought on her lunch hour, are all part of the price I pay.

Technically, I am on Facebook because I had to be for my job and I do have some friends. And to the 17 brave souls who soldier through our unrequited “friend”ship, thank you, but don’t expect much and, more importantly, you’re better off without me.