The Many Stages of Job Loss

Nearly everyone is familiar with the stages of grief. While most agree there are five - denial, anger, bargaining, depression and, finally, acceptance - some add in a few extra, like pain and guilt, to ensure no raw emotion goes unexplored.

While I'm certainly not equating job loss to the grief of losing a loved one, it is still a loss - one that leaves a large void. A gaping hole, in fact. In addition to saying goodbye to your career, paycheck, colleagues and friends, you've probably also shed some self-esteem and plenty of confidence.

Since losing my job in January, I've found myself flailing my way through not only the aforementioned stages but several additional ones.

Here are some of the other phases my husband (and partner in unexpected early retirement) have also encountered (in no particular order):

Losing our jobs has been like our own personal Jaws. We've come face to face with fear and uncertainty while navigating the murky waters of unemployment. Without Roy Scheider to soothe us and lend some much-needed perspective, we've frequently found ourselves face down in a trifle bowl of tiramisu. While I don't recommend lingering long in this stage, especially when you don't have a lot of disposable income to blow on mascarpone cheese and a new, plus-size wardrobe, it can sweeten up an otherwise sour time. 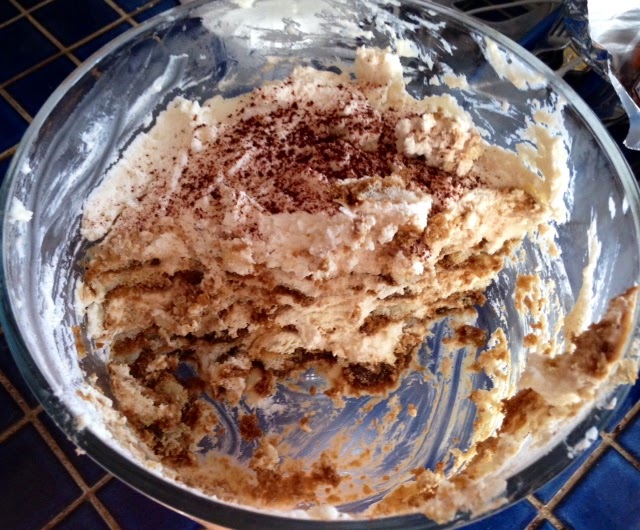 When you don't have to wake up until 7 a.m., (and that's only to get the kids to school) you have the time to watch A LOT of television in the evenings. Personally, viewing a series that involves characters with really demanding jobs has been a comfort to me while I loll about in sweatpants trying to remember how to spell. For example, could any position be as stressful as Homeland's Carrie Mathison's? Or how about working while constantly looking over your shoulder like the empathetic but death-defying KGB agents Philip and Elizabeth Jennings from The Americans? But they're not real, you say. Well then, imagine being screamed at all day by that lunatic/perfectionist Jeff Lewis from Flipping Out. Or worse yet, what if you were an intern for the Real Housewives of New York's perennially-misguided Sonja Morgan? And, oh, that poor Supernanny! Summoned to people's homes only to be yelled at, covered in tears and snot and then stuffed back into that tiny car? No thank you.

This has to be among the worst stages because it stars one of the hardest emotions to banish: self-doubt. During this phase you will experience Lindsay Lohan-like mood swings. It's particularly terrible because it forces you to consider everything from a hostile takeover of your son's dog walking business to investigating becoming a beekeeper. You will ask yourself why you didn't pursue a masters degree. You will curse yourself for not becoming a heart surgeon even though the sight of a mere paper-cut makes you woozy. You will regret mocking your friends who worked weekends while butt-kissing their way into corner offices.

Insomnia Sparked By Its Cousin Anxiety

While you might be able to get to sleep, don't expect to stay asleep! The inability to quiet your mind probably isn't caused only by consuming all those ladyfingers soaked in instant espresso that made up your tiramisu. It's more likely because you have no idea what the future holds. And as the minutes tick slowly by you imagine yourself working at a Home Depot, wearing an orange smock and contemplating shooting yourself in the head with a nail gun within the next six months.

Don't Even Open That Catalog

Whether it's Frontgate, with it breathtaking patio furniture - far nicer than any that's actually inside my home - or Oriental Trading Company, complete with hula skirts and monogrammed yoyos, these wish books must be recycled immediately. Free shipping be damned, I still cannot afford a single item so don't tempt me.

Wait, What Do You Mean That Was The Last Beer?

At the end of a day when the only people who've called you are gutter cleaners, the school nurse and dozens of solicitors who mispronounce your name but still want your money, it's nice to take the edge off. While you may have had to trade down when it comes to your beverage of choice, (Goodbye, Dogfish Head, Hello, MGD) it's still nice to know you've got a cold one waiting .. or at least until you encounter this stage. And FYI, the "Wait, what do you mean that was the last beer?" phase only occurs after all liquor stores have closed for the night, forcing you to dig behind two-week old lettuce and ketchup bottles in the hopes that an errant beer is hiding just beyond the soy sauce.

If You Think It's Such A Great Job, Why Don't You Apply?

While I don't think a life coach would recommend that anyone rock-paper-scissors themselves into a new career, my husband and I have been goading each other into applying for positions that neither of us wants. Because some of our skills overlap, we find ourselves competing for the same jobs. Many times I'll suggest he send his resume and cover letter for an opening I, too, could consider, but because of something (a lengthy commute or a question like "What's Your Theme Song?" on the app) I will try to throw it his way. No dummy, he immediately figures this out and that's when we get into a heated battle of "You apply for it," "No, you apply for it." "No, you!"

While I'd like to think one of us will be moving into the "Let's Buy A Piñata! I Just Got A Job!" stage soon, I'm not buying a gross of Tootsie Rolls just yet.