For My Next Trick...

While we've been unemployed, my husband and I have had lots of time to mull a veritable cornucopia of potential career options. Though we were both in media, our experience now seems about as common as a finger tattoo and as relevant as a Sony Walkman.

So the question is: What do we do next?

When you have a job and a steady income, it's easy to fantasize about all you could accomplish if you weren't being "kept down by the man." But when faced with the terrifying freedom to make a fresh start, where do you begin?

I started by scrolling through my mental list of talents and interests. I had enjoyed gardening until I unearthed an underground bee colony last August. Several of these pests found their way into my bra, leaving me gyrating on my front lawn and whipping off my t-shirt in a weird Deadhead-meets-Brandi-Chastain-like dance. My neighbor, mowing his lawn, kept his head down, probably assuming I was having a heat-related seizure and it was best to let it run its course. Also, I'm still afraid of our weed whacker and the errant field mouse. So scratch starting my own landscaping service.

I love cooking and baking and believe our town could really benefit from an upscale brunch/lunch eatery. But when I mention this to my husband, he decides its a good time to do some role playing. He pretends he's a crazy customer ranting that my carrot muffins taste like excrement.

"What are you gonna do then? You can't ask them to leave! Plus, you'd get sick of cooking day after day."

"Do you think Jeffrey speaks to Ina this way?" I fumed right before I had a flashback to the last time I was preparing for some dinner guests and had to lie down on the kitchen floor from the exhaustion of making four quesadillas.

When most people we know talk about reinventing themselves, they mean they're considering experimenting with jeggings or maybe trying a Malbec. What they don't mean is that they're going to take out a home equity loan and plunk down a couple hundred Gs on a taco truck.

But seriously, what about a food truck? A healthy one, where I could mark up fruit to say, $2 a banana? Many's the time I'd have paid upwards of $10 for a decent cup of coffee rather than have to wrestle my three boys off a jungle gym and out of a park.

My husband, God bless him, is a nervous driver so I'd be behind the wheel. Though I'm more confident, I haven't really driven anything larger than our mini-van. The streets in our tiny town are narrow and in my food truck fantasy, I can already hear his panicked screams, "Liz! Liz! You just backed over a double stroller!" "Liz, there's a nanny pinned beneath some of the rear tires!" "Liz, you just knocked down a row of mailboxes with the side-view mirror!" That could get old fast.

I'm also thinking of starting a t-shirt company and pitching some of my favorite slogans to Urban Outfitters as I could see my catchphrases fitting in nicely beside the "Jesus, I'm drunk" tee I've had my eye on. 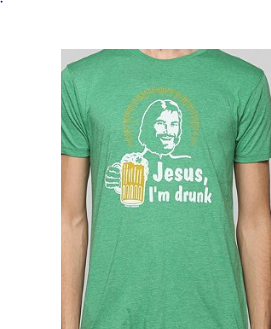 "I hate cyberbullying. Personally, I still like to do all my bullying face-to-face."

"You want a Happy Meal? Here's a meal, now you're happy."


Speaking of Happy Meals, it doesn't help that my mother, a self-described fast food junkie, likes to tell me, "I've just come from McDonald's and they've got openings for full- and part-time help. What do you think?"
I think I'd rather stick my hand in the Fry-Daddy than throw on a polyester uniform and attempt to placate the hungry and demanding McRib-lovin' public (though I suppose it would provide an opportunity to perfect my Spanglish.)
But, the woman, in the grip of a powerful fried chicken addiction that would make Colonel Sanders proud and a cardiologist cringe, just won't quit. "Do you think that Popeye's is too far for you to travel? They could really use a better manager."
Yes, and I'm sure a thorough visit from a health inspector, but I digress.
I'd share some of my husband's ideas but they're really too ridiculous to mention-kind of like when I was pregnant and I'd want to talk about baby names and his only suggestions were Beyoncé and Shakira. A man with intense allergies, he's proposed everything from ferret breeding to taking over our son's dog-walking business. Named "Ruff With Me" we haven't had the heart to tell him this could have other connotations so we're not going to market it on Craigslist just yet.
For now we're stuck with attempting to return to our former careers and our other fallback: buying lottery tickets.