When my husband lost his job, the first thing he did (after he took a victory lap around our house) was join a gym.

During his long work days, which included riding a train for close to 3 hours and sitting at a desk for nearly 9, he grew to believe that his sedentary lifestyle was killing him.

Now I equate exercise with drinking lighter fluid: yes, I could do it, but it would probably be painful, ergo why would I want to? But he somehow convinced me that this was how he wanted to spend all that money he was saving by not needing a monthly train pass or Metro card. (He had simultaneously taken over all the laundry responsibilities, so how could I say no?) Also, his quest to "get buff" as our 8 year old says, caused me to take a long, hard look in the mirror. While I wasn't Carni Wilson just yet, I couldn't keep pretending that the dryer was shrinking all my pants week after week, especially the pairs that never left the closet because I couldn't button them in the first place. So taking the wisdom I'd learned from a recent reading of "Duck and a Book," I said, "If he can do it, so can I!" and off to the Y we went.

Now we're not fancy gym people. We don't need any personal trainers and we're not purchasing those matching glow-in-the-dark Lyrca suits, so color me surprised that a simple family membership at the Y was going to set us back $108 a month.

"That could buy a lot of chardonnay, which, let's face it, we're going to need to keep our spirits up," I tried to reason with him.

He wasn't having any of it.

Now another hurdle I had to overcome with this whole exercise business was the fact that the median age of members at our Y is 87, and I'm being generous. Looking out at the sea of treadmills, the faces staring back at you would make E.T. look like a Lancôme model.

It also struck me as ironic that there's "walker parking" beside the cardio area. What's worse is that 90 percent of the time when I squint at the display on the elliptical machine of the octogenarian striding beside me, these old codgers are out-pacing me.

Don't get me wrong, I wasn't hoping to work out with the cast of "Jersey Shore" either. The last thing I want to do is potentially share a toilet seat with Snooki. All I'm saying is there's got to be some middle ground. 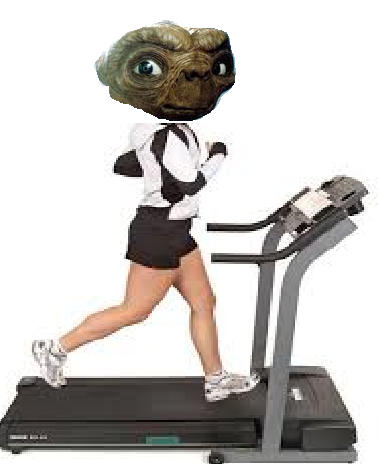